“You are going to IRAQ!?!?” I must have heard that response 100 times, basically every time I told someone about my planned trip. “You know it is DANGEROUS there!!!!!!” Yes, it can be, but I did my research so I wasn’t worried.

I went and I had no real problems, but I’ll let you in on a little secret. I wasn’t really in Iraq. Yes, my passport now has an Iraqi stamp. Yes, the hotel had an Iraqi flag flying. When I brought up Google Maps, the little blue dot was smack dab in Iraq. However, I wasn’t in the Iraq that you are thinking of. I was in Erbil, the capital of Kurdistan. Kurdistan is a semi-autonomous region in the northern part of the country. There, Muslims and Christians, Kurds and Arabs all live side-by-side without much, if any, issue. 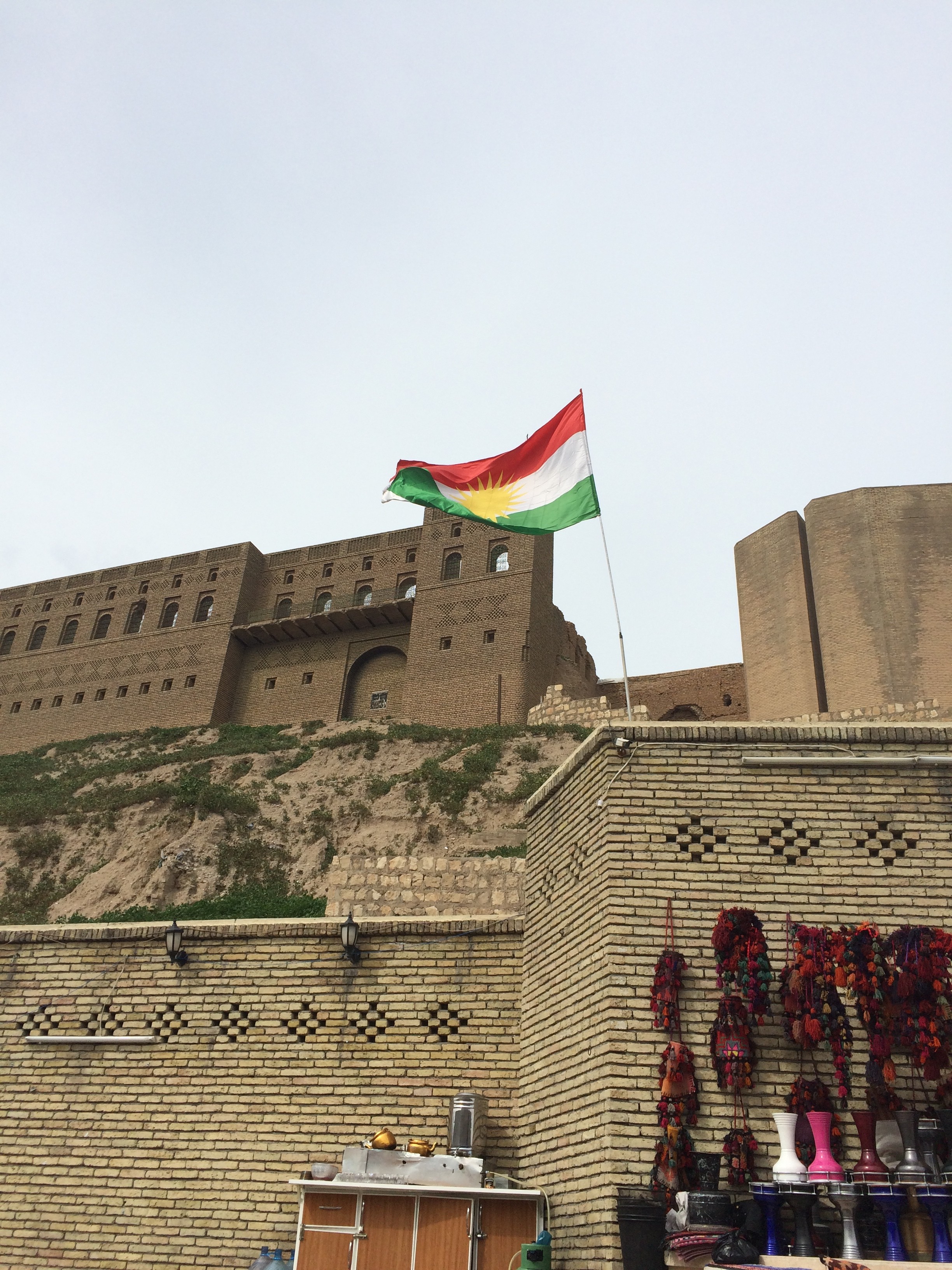 The Citadel of Erbil with the Kurdish flag flying

Kurdistan has been essentially separate from Iraq since the end of World War I. After the collapse of the Ottoman Empire the Kurds’ territory was split between Iran, Iraq, Syria, and Turkey. Saddam Hussain pulled a Hitler and committed genocide against the Kurds, using chemical weapons on them by the thousands in the late 1980s. The Peshmerga, also known as the Kurdistan Army, was aligned with Iran and Saddam was getting revenge for their role in the Iraq/Iran war.

While not on your map, Kurdistan is a very real country to these people and the Peshmerga has been fighting for its independence for decades. Finally, in 2005 after the US led invasion of Iraq, and removal of Hussain, the new constitution granted a Kurdistan Regional Government. Today, Kurdistan has its own president, legislature, police, army, budget and everything else normal countries have.

The Kurds take security very seriously with armed checkpoints every few miles on the roads outside of Erbil. The borders are constantly patrolled by the Peshmerga. It is working, there have been just three bombings in the last nine years. This level of security doesn’t exist in the rest of the Iraq. 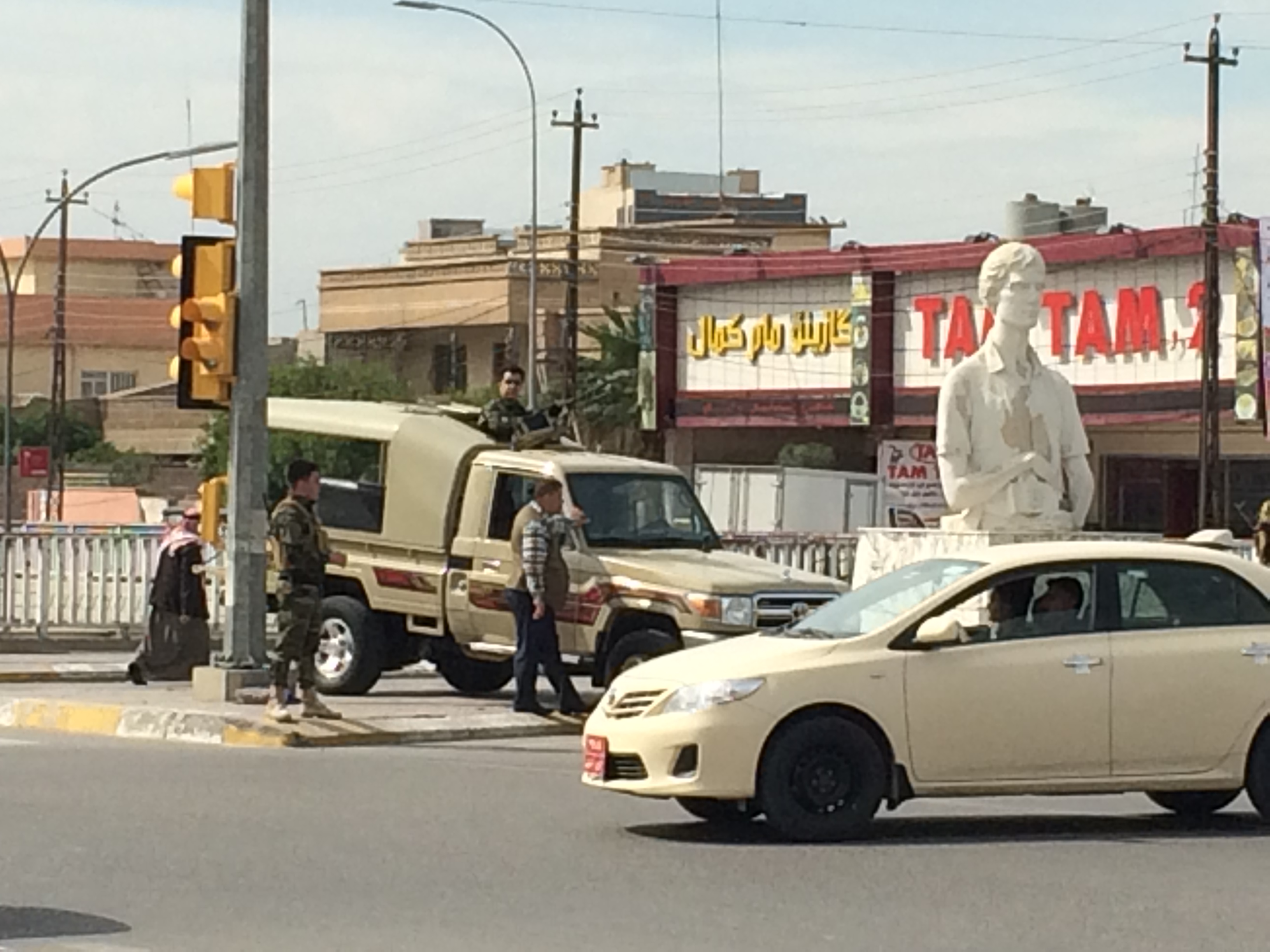 Mounted machine gun on the street

My time in Erbil was fantastic, I was treated almost as a celebrity. In current times, tourism has become limited to nonexistent because of the perceived threat of ISIS. The so called Islamic State holds the city of Mosul, a mere 50 miles to the west. People would walk up to me and ask where I was from, I would say the US and their response would be positive. On two occasions, I was saluted. I don’t know if they figured I was in the service or they thought that is how you greet Americans. I don’t know but it was a bit awkward for me, I wasn’t sure how to respond.

The city is a circle so it was easy not to get lost. Erbil is full of nice parks, great restaurants and the best shisha I’ve ever had. The human history in the region is mind boggling. Not far from Erbil, Neanderthal bodies have been discovered and are up to 65,000 years old. Just being in this cradle of civilization was exciting to me. Much more recently, but still long, long ago there was a citadel built in the middle of the city. It dates back to the fifth century B.C., which makes Erbil the oldest continuously inhabited city on the planet!

While everyone was friendly, Erbil was a bit lonely. There no hostels and very few Couchsurfers. I didn’t meet another traveler (outside of the airport) in the six nights I was there. The women would hardly make eye contact with me, let alone speak. These problems are not unique to Erbil, but the region in general. If it wasn’t for one Couchsurfer who showed me around for two days and some guys I met in a coffee shop, I would have been completely alone. I look forward to the day I can return and see more tourists. 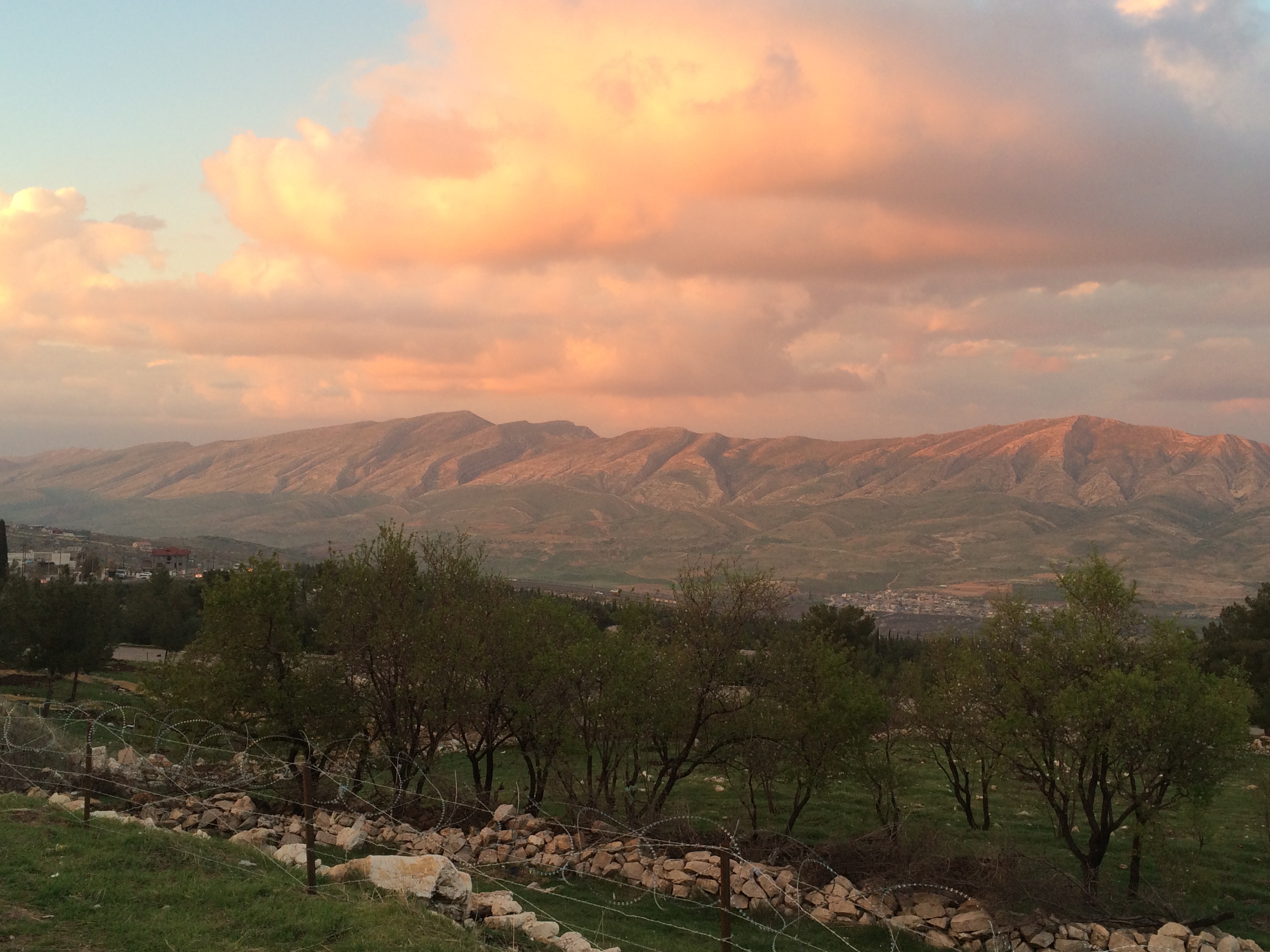 Of course everyone wants to read about my brushes to danger. Nothing really happened on that front but there were two times that I was unnerved. One day as I walking about the city, two guys on a motorcycle passed me. The guy on the back of the bike was wearing a black ski mask, mind you the temperature was in the high 70s or low 80s. This immediately put me on edge. The black ski mask is a staple of the jihadist’s wardrobe. Much to my chagrin, he motions to the driver to pull over when they see me. About 50 feet away, the guy jumps off the bike and begins to follow me on foot with the ski mask still on. I pick up the pace and decide I need to get around other people so I went into a store. There I hid for what seemed like forever. It was a real life, high stakes game of hide and seek. I don’t know if he followed. When I went back outside he was nowhere to be seen. Maybe it was a kid trying to look cool or maybe it was the real thing. Who knows, but it got my blood going a little.

The other time was while I was riding with my Couchsurfing friend. We went though many security checkpoints, it was never a problem, it was a car with an Erbil license plate and a Kurdish driver. Until on the way back, a soldier took one look at me and asked for my passport. “My passport? Why would I carry my passport?” I thought. I make it a point to keep it in a safe place and not on me. It was back in the hotel, about a 30 minute drive away. After saying that he ordered the driver to pull over and for us to go into their headquarters. We walk into a small room with four guys, AK-47s propped against the wall. They again asked for my passport and I gave them my Hawaii driver’s license. That wasn’t going to cut it as they laughed. This wasn’t good. For a moment I had thoughts of being detained. Luckily, my friend was a respected doctor and gave his business card while assuring them I was okay and he would be responsible for me. They took him at his word and let me go. Thank you Couchsurfing! He later told me that they let me go essentially because I was white and wouldn’t have if I was Arab.

Erbil is a city I would recommend visiting. I hope to return someday and check out more of Kurdistan and maybe, just maybe make a push south to the other Iraq. 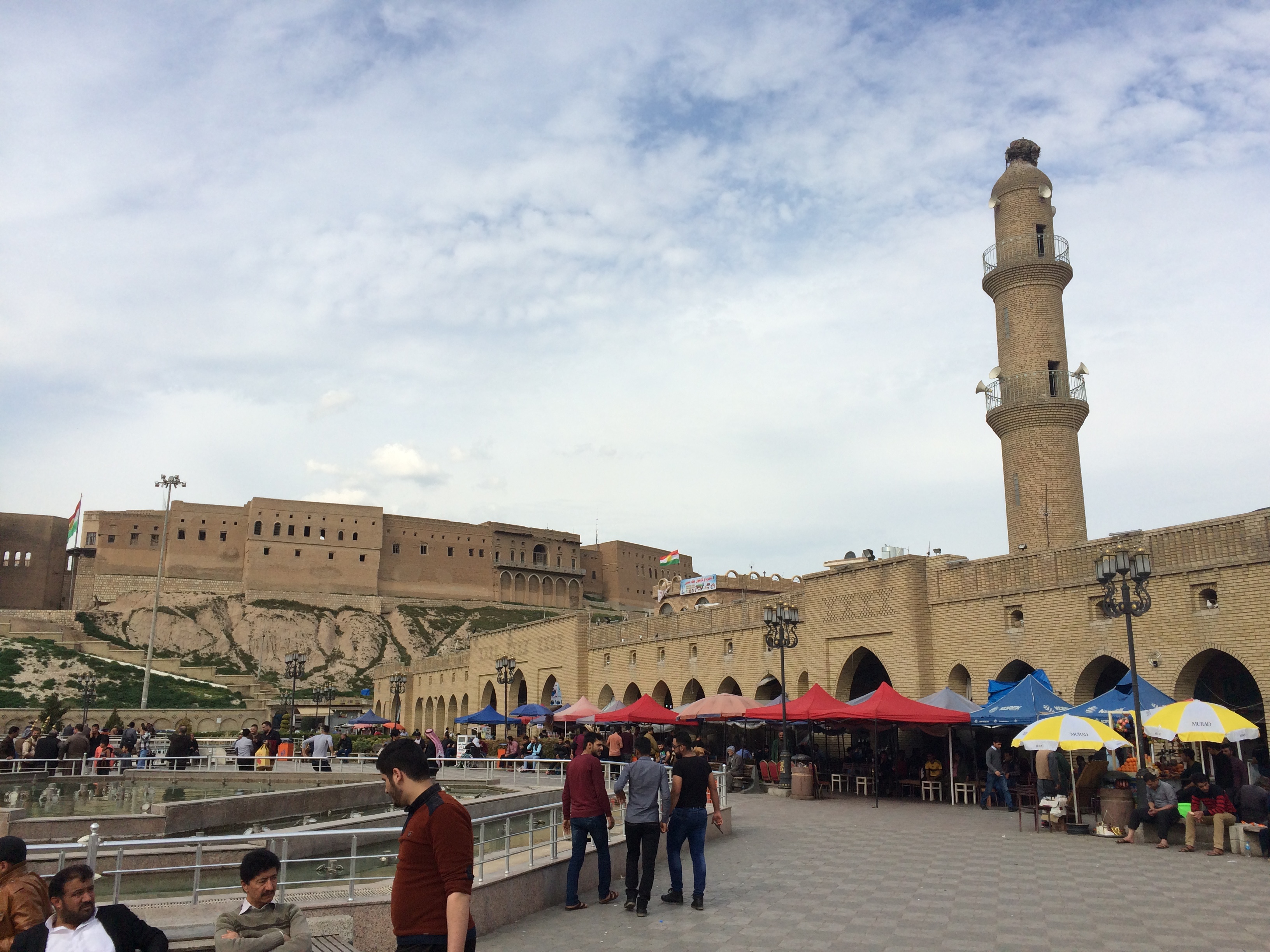